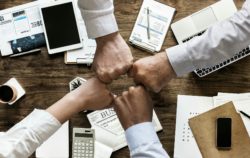 How many times have you sat in a meeting counting the minutes until it was over?

Too many, right? Too often, we leave tired and feeling like we’ve just wasted valuable time with little result. Harvard Business Review has developed a calculator to demonstrate the expense of these unproductive meetings. It doesn’t factor in the mental drain, distrust and eroded relationships bad meetings cause. Great experiences are remembered and when it comes to meetings, there is little to celebrate.

I recently attended a particularly bad meeting. I know this because no one appeared to be leaving energized. A group had formed to discuss retail issues. Potential members could learn about the group and ask questions. The outcome was to find new members or at least more followers so that more diverse retail voices could be heard and more buzz and excitement could be created. Several failures occurred which prevented the intended outcome. I call them opportunities for improvement.

The first contact, like the first impression, impacts everything else that follows. Attendees arrived at the meeting room to find a closed door. Staff met participants outside the door and explained that a closed meeting had gone long and they’d just have to wait a few minutes to enter. This first posture set an unintended tone of confrontation. During the time waiting outside, one of the attendees even started complaining about another event and brought the negativity inside when the doors were opened.
Furthermore, the prior meeting included those who were supposed to be “welcoming” the new people to the group. The welcome never happened. The stage had been set. I believe most of this meeting’s failures could be attributed to this lack of positive first contact.

Every meeting should start with greetings. Shake hands. Prepare a fun question to pose if attendees have never met before. First impressions matter. Provide a good one.

Adding to the confrontational tone, the room was being rearranged from a circle format to a long line of tables on one side (meeting leaders) and a line of chairs at least 10 yards away (for attendees) along the wall. It reminded me of a firing line.

Introductions started with leaders and past participants, followed by new participants. They simply stated name, company, and city. It was rote. The dull and indifferent introductions meant another missed opportunity to find common interests. The first ten minutes were uncomfortable for everyone and an absolute turn off to the new participants.

Do something more than name and company; maybe a fun fact, to get people curious about each other. If your group is too large and time doesn’t allow that to occur, simply split the group up into small groups up to five and conduct the same activity. It is time well spent to get attendees comfortable and ready for the task to come.

After introductions, one of the already disgruntled attendees proceeded to let the group know he could only stay a few minutes, pronounced his problem and then promptly left. It reminded me of the term “seagull management” where someone flies in, drops their doo-doo and leaves. Meeting organizers should have stopped the “seagull” as soon as he announced his intentions to leave immediately after he spoke.

Every meeting needs a review of expectations of behavior. Even exciting, innovative meetings require people to respect the input of everyone. After contact and comfort have been established, it’s always a good idea to discuss how the meeting should go. Meetings with expected conflict should include a set of written ground rules agreed upon by the attendees. That way, everyone is able to point out bad behavior and move past it.

Meeting facilitators are responsible to know when the meeting needs to speed up (not enough work being done) or slow down (out of control). It’s a tricky dance but important to maintain energy.

I witnessed a lot of raised voices at the aforementioned meeting. Those who spoke seemed more interested in telling their story than to fully understand other’s perspectives. There were attempts at understanding, but there was much time wasted because emotions had taken control and no one recognized this was happening. Or, if they did, it wasn’t safe to bring this awareness to the rest of the group.

The meeting needed to be slowed down and participants needed to be reminded of the purpose. Because contact, comfort, and safety weren’t covered, it was nearly impossible for the meeting to accomplish anything at this point.

Good meeting facilitators sense when energy is too high or too low and make adjustments throughout. There is usually a mix of order and chaos for high productivity. If you regularly run meetings where conflict is likely, it’s best for you to study the art of meeting movement (and human behavior, in general).

Good meetings take time to close by recapping meeting accomplishments, discussing how the meeting went and taking specific next steps. This provides clear assignments, provides feedback for meeting process changes and sets the stage for what happens next. Skipping the meeting outcomes step means future planning must be improved.

As you can imagine, the meeting I’ve been describing thus far did not close in an impactful way. A majority of the attendees were frustrated when they left. No one was smiling. There was no sense of accomplishment or future direction.

Set time as part of agenda development for meeting closure where you can summarize, give attendees the opportunity to describe what was accomplished and how they felt about the process. Provide clear direction as to what will happen next. If accomplishments are listed and loose ends are tied, attendees will feel gratified and encouraged to take action.

The cost of failure:

Using the aforementioned cost calculator, I used an estimate of 35 people with an average of $40,000 annual salary per person. For a one-hour meeting that’s a minimum of $1,000 in time and money wasted. I underestimated some of the salaries but this just shows you how expensive any meeting can be. There isn’t a way to estimate the cost in morale or future trust that the group can accomplish tasks at a future meeting.

Well-planned and well-facilitated meetings give energy and clarity. My most successful meetings have been where I’ve spent nearly as much time in planning as in the meeting itself. I use two sets of agendas; the one I send to the attendees and the one I use to include written outcomes of each section of the agenda, materials needed and possible activities and questions to promote movement. I recall a strategy meeting where the official meeting agenda was two pages and my facilitator agenda was six. Positive meeting outcomes were achieved because it was well planned and managed. Everyone left energized.

Figure 1. “Flow of Ministry” from Circles of Life: A Process Approach to Training Ministers and Facilitators by John Reardon (reproduced with permission).

I follow a meeting process developed by psychologist John Reardon called “The Flow of Ministry” which was originally developed during his work with local schools and a youth ministry center. Reardon also uses it as a part of Human and Organizational Development training at his firm Phoenix Process Consultants. The model starts at the contact stage, moves through to closure and then loops back around. Since most activities don’t just end when the meeting ends, the process is a continuous loop. New attendees require that contact and comfort must start again. Even follow-up meetings with the same attendees should include good first contact, a comfortable setting, and reminders of meeting safety and rules.

Steve Jobs once said, “Great things in business are never done by one person. They’re done by a team of people”. That means meetings are a requirement of business; no matter if there are two people or 200. Let me help you make your meetings more productive. If you’re interested in a workshop to help your staff learn the tools for a great meeting or need a meeting facilitator, contact me here.