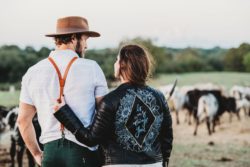 Photo by Jessica Rockowitz on Unsplash

I grew up on a farm and am back again. I am now much more aware of the current climate of disappearing small farms and rural suicide and leaves wondering what I can do to help. I’d been communicating with Ted Matthews, perhaps the only farm specific counselor in the state of Minnesota and maybe even the United States. I sent him some workshop ideas and he just encouraged me to take them out and try them. When the Rural Women’s Conference came up on Facebook with Ted as the keynote speaker, I just had to attend. The event, focused on communication, did not disappoint.

When I arrived, I met Hannah Tjoflat, Executive Director of United Way of McLeod County, who organized the event. She is an energetic and passionate woman who, with her husband, recently bought an organic farm in the area. Having her type of youthful confidence makes me hopeful for the future of this area. We talked briefly about Ted and how much his services are needed.

Ted’s talk was entitled How to Improve Communication to Improve Relationships. He opened his talk with a men-are-from-Mars-women-are-from-Venus flare and the audience was immediately at ease and laughing. He later shared a story he’d found on the internet that hilariously described the differences in how men and women think. In the more serious times, he reminded the ladies that it’s only been within fairly recent history that women have a say in how the farm is being managed. This change is a good thing and requires a major adjustment in communication.

Ted spoke about the need for any communicator to go into conversations with respect for the other person. He talked about being nice but more in the way that we need to first be nice to ourselves. We must look at the phrase differently from what we’ve been taught. Instead of just being nice to others it’s more like; “If you’re nice to you, you have the ability to be nice to others and then, it will come back to you!” So many of us simply don’t take care of ourselves first so that we can better care for others. That also means we have to value ourselves. We must expect our needs to be met at the same rate as we meet the needs of others. Basically, it’s what they teach on planes regarding oxygen masks. 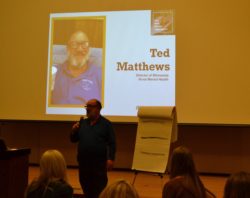 Photo by Meghan Laffen from United Way of McLeod County

Ted explained to the group that even the healthiest person alive has good and bad days and their emotions adjust accordingly. No one exists on an even plane. He also described how anger cannot exist by itself and is indicative of an underlying hurt. We are all a series of ups and downs and that is what makes us all human.

This made me think of the Wellness Continuum I use in my workshops and personal coaching where health is actually the center. Health actually exists in the middle or neutral position. The far negative end is death and the far positive end is living life fully. Moving in the direction from health to living life is constant learning and encouragement, which everyone needs for personal growth. I’ve crafted my workshop and coaching services around making these positive movements.

As Ted spoke of anger and hurt going together it made me think of several concepts I use in wellness. First, how we are all inferior and how our early childhood recollections often come bubbling up in ways we don’t even realize. Second, I conduct an exercise with people to walk them through a stressful situation and all thoughts and emotions that go along with it. As we walk deeper into the exercise, we dig up unconscious feelings and finally get to that inner judge that holds us back. We are better equipped to find solutions once we acknowledge our deep insecurities.

In the end, when we make bad decisions, it doesn’t mean we’re bad people. We are all normal in our oscillating emotions. If we were all just a little more compassionate with ourselves and each other, our communication efforts would surely improve. Good people sometimes do bad things so the goal is to help turn those bad things into better things by identifying and adjusting the behavior that puts us in conflict

Not always right or wrong

Shifting topics from emotions to teenagers was an easy transition. Anyone with experience around teenagers knows it’s a trying time. Some in the room could remember that time clearer than others. Ted spoke about understanding the thought processes of teenagers and parenting. Perhaps I didn’t quite hear right when he mentioned that teenagers only listen because they think they can convince adults of their way of thinking. Even so, he said we should lecture anyway in hopes that something will stick later.

There is some truth to that. I think it is possible for teenagers to listen more if parents would simply ask instead of telling. It took me a while to figure it out (and I am by no means perfect). Once my teens got old enough to drive I figured they’d better learn how to make their own good decisions. That meant asking more about what happened, what they felt and what they really wanted. If they have thought about an issue thoroughly, in the end, they had to make the best decision for themselves.

Ted finished his talk with a little exercise on Introverts and Extroverts. Using a drawn out football field, attendees had to put themselves on the yard line that described where they’d be located in relation to their “end” of the field. He described, again, that one is bad or good but that when we’re at extremes, communication becomes more challenging. Identifying such differences within couples and families early results in opportunities to negotiate the needs of the individuals within the relationship.

Sometimes there is no right or wrong, we just need to meet each other where we are. In the words of Alfred Adler, “We learn in friendship to look with the eyes of another person, to listen with her ears, and to fell with her heart”. We all see the world a little differently. When we listen and then communicate with empathy, true dialogue happens and relationships bloom.

I am hopeful I can help Ted not feel like the Lone Ranger in his work with wellness services for the rural and farming communities. I offer experiential workshops on many of the topics mentioned above. If you want to learn about managing stress, emotional intelligence, positive language, conflict resolution or personal wellness, feel free to contact me to set up a workshop or arrange personal coaching.

CONTACT ME for more information on my wellness, communication, and personal or team growth services.