Hunting for a New Perspective 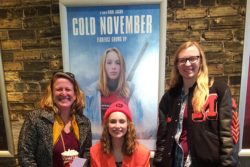 I have been waiting two years for the movie Cold November to be released. The film brings my love of movies and the outdoors together in a way I’ve never seen before. As someone involved in hunter recruitment, there is much to learn from this movie. Along with the story behind the movie, it might change minds about hunting.

I came to this movie in 2015 through a high school friend whose wife posted the Kickstarter campaign online. My friend’s sister is Anna Klemp, who plays the mother of Florence, the lead character (portrayed by Bijou Abas). The description of the movie was simple: “A feature film about a 12-year-old being raised by women who is taken through the rite of passage of killing a deer for the first time”. The description and connection were enough to inspire me to make a small contribution to the $25,000 needed to bring the film to the finish line. My “backer” status meant I’d be notified of the movie’s progress. It’s how I learned of its public release and opening night in St. Paul that included a Q&A session with the director, Karl Jacob, and two of the cast. March 30, 2018, was the big release date and I was excited to go with my daughter.

For me, the movie is a must-see for three reasons:

I was struck by how well the movie captured authentic hunting. The kind of hunting faced by a majority in the community – at least where I live; includes long waits, varying weather and a goal of meat for the freezer. Big antlers, when seen, are often a happy bonus.

There was more time captured in learning, gutting, dragging and skinning which is the real truth of hunting. There were two scenes around skinning; one where Florence learns about it and a second where she’s skinning to finish the process. The best scene is of Florence actually gutting a deer; it’s one that most captivated the audience.

During the Q&A session, I learned about the planning that went into the gutting scene (and the movie in general). They were limited to shooting the scene during the short firearms season and the weather in 2015 had been extremely sporadic; rain one day, snow the next and always cold. They had to find a location for the gutting scene, set up every piece of equipment and have everyone on call to move if a deer became available. Turns out, Jacob’s mother is the one who shot the deer. The cast and crew had only hours to complete the scene and hope they captured everything. There were no second takes.

What I love even more is that it’s a one-of-a-kind take on hunting in a matriarchal family. The Uncle (played by director Jacob) plays a vital role but not the male mentor role you see in every other hunting story. He’s there to support his wife and provide a lesson in healing after death. He is not the hunting leader; that role is left to the women.

The “coming of age” tale not only ads a depth to the story, but also resulted in the best laughs. I could see some guys being uncomfortable but this portion of the story adds to the authenticity as well. I don’t want to give it away.

During the Q&A, I asked about the focus on females and Jacob explained that this is how he’d been raised and it’s a story that exists but hasn’t been told. You can read more about Jacob’s female influences here.

3. Real dialogue about hunting and guns

I’m not sure how many non-hunters will go see the movie. And, without the Q&A context after, I’m not sure what dialogue will happen.

My favorite question of the night was from a teenager to Ms. Abas, who played Florence. The teenager asked what it felt like to have her hands inside a dead animal. The question was so cool because it meant that curiosity had been piqued. It was actually the “gross” that caused the most excitement. Ms. Abas answered the question well describing that the warmth was nice considering how cold it was outside. She also said that while it truly was gross, it was exciting to be inside something that was once alive and is now dead. She said she didn’t really have the words to explain the feeling. She’s right. Unless you experience it yourself, it is very hard to explain.

One of the audience members asked about the cast’s feelings on the current gun debate. Both Jacobs and Abas responded well. You can read more about Jacob’s response regarding guns here. Ms. Abas was required to take firearms safety as part of the process. And, having a first-hand experience with guns and hunting, she comes from a now-educated position and I believe that makes her more believable. She explained that hunting and the guns associated with the activity have a place as do guns for target practice. But, it’s time to keep high capacity guns to the military. She did also say that although she isn’t likely to go hunting again herself, she doesn’t plan on giving up meat anytime soon, and is highly respectful of hunting as a means to eat.

Overall, I was somewhat surprised how this St. Paul audience described their new respect for hunting after seeing the film. I say “somewhat” because many of the audience members appeared to be friends of those associated directly with the film. The tone, even after the gun question, was one of respect and support and that’s pretty darn cool. I am hopeful that this response is commonplace as the movie expands its reach. 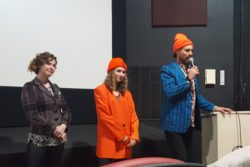 Right after the Q&A, a man approached Jacob to say as a hunter he loved the movie and then attempted to whisper that it would have been perfect if not for the “fake” deer sounds during the shooting scene. Jacob assured the man that although the sounds were made by him, Jacob had experienced these cries during his own hunting. I concurred that I’d heard it once too. I heard those blood-curdling cries as I watched a doe get hit by a passing semi-tractor trailer which had broken the doe’s back. It’s a terrible sound and we quickly put the deer out of its misery.

As hunters, we tend to judge. I caught myself doing the same. There was a time early in the movie where I cringed when two piebald deer entered and appeared unafraid around Florence. Jacob assured the audience that every scene was based on actual family experiences during hunting. I believe something like that did happen now that I understand the full context of the movie. I am glad I kept my judgments to myself.  The mystery of nature makes many more things possible than we can imagine.

I remember an article my friend Amy Hatfield once wrote for archery entitled “Archery could use a little less insider critique, a little more empathy“. When I worked for the Archery Trade Association, almost every picture was scrutinized and judged and it often wasn’t very helpful nor did it really matter. I hope hunters will see the potential benefits this movie offers above any need to feel superior in the story of hunting.

On the drive home

My daughter and I continued to discuss the movie on the drive home. She also thought the movie felt real, especially when the bag of candy came out of Florence’s pocket. We laughed that it even included some of the same candy we take along to the stand. However, we’d met Ms. Abas before the movie and it seemed likely she was a “city girl”. My daughter suggested that surely it wouldn’t have been hard to find a young lady with hunting experience. She could have done it, she supposed. She later approved of the choice as she heard Ms. Abas eloquently respond to questions with a new respect for hunting and guns. We both hope Ms. Ajas will pass her new knowledge and experience on to her friends and her community.

I was joyful for one component missing from the movie; the posed trophy shot. I believe these images do injustice to the story of hunting and the hunting community. I admit I’ve taken those shots myself; it’s sort of ingrained. But a few years back I started to change my mind about the images. In fact, I once refused to allow one of my trophy shots to be used in a magazine. I was severely chastised for that decision. Along with comments from a non-hunting friend regarding such images and seeing how this movie was viewed as respectful hunting, I am glad I didn’t let anyone talk me out of my decision. Hunting is so much more than a single moment captured. Real hunting stories are much more in-depth, varied, and full of life.

As the final credits rolled, my daughter caught my name on the screen. Every Kickstarter backer was listed following all of the usual credits. The campaign started in late 2015. In December 2017, the film won the Jury prize for the best narrative feature at Indie Memphis Film Festival, the highest honor according to Jacob’s Kickstarter update. I am so proud to have played my tiny role. Hopefully, by printing this story, I can play an even bigger one. If you’re interested in seeing it, ask for a screening of the movie here. 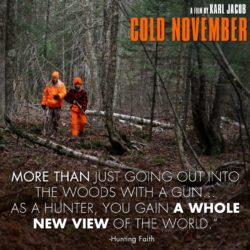 Here is the trailer for Cold November: https://www.coldnovemberfilm.com/

Here is a link to the Star Tribune’s review of the film: http://www.startribune.com/minnesota-made-cold-november-a-female-oriented-hunting-movie-is-right-on-target/478301633/