What It Takes to be a Great Mentor: Part 2 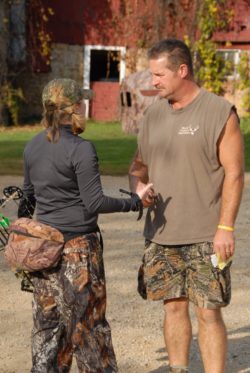 In Part 1 of my two-part series on what makes a good hunting mentor, I covered the need to discuss expectations, develop a relationship, positivity, and safety. Today, I’ll cover three more important aspects of mentorship if you are to succeed in becoming a great mentor to new people finding this challenging, yet exciting and healthy activity.

Along the same lines of safety, there is trust. In Stephen Covey’s book; Speed of Trust he says; “Trust is equal parts character and competence… You can look at any leadership failure, and it’s always a failure of one or the other.” To gain trust you have to be willing to be vulnerable yourself. You have to be honest and authentic. Share your failure stories and what you learned and you’ll be better connected. If the student hears about you overcoming failures they will be more comfortable sharing their failure stories and ask you for advice. You’ve been there and understand, so they can learn from you.

Confidence in your own abilities helps establish trust as well. Be confident but not cocky and purposeful in word and deed. Keep your word. Your actions, not words are what is trusted. Be there when you say you are. Do what you said you would do.

My mentor, Dan Traenkler, followed through on every promise. He was on time or texted if there was a change of plans. He didn’t tell my stories to others but waited for me to release them when I was ready. He laughed at himself sometimes which meant I could laugh at myself too. He was serious when he needed to be and guided me through the learning process. Doubts don’t build confidence. Trust does.

Good mentors guide students to become critical thinkers, to help them make better decisions on their own. Critical thinkers ask themselves questions about what happened, what each behavior meant, evaluate what they did right and wrong and how they’ll adjust in the future. If you tell them everything instead of making them think, they will learn nothing (or at least not much).

As much as I hate to admit, I did hit a deer while bowhunting and it was not a clean shot. I did not know that immediately, however. I thought it was a good shot. I’d taken my time, had the right distance, aimed at the exact location and thought I’d followed through. I immediately contacted Dan that I’d taken the shot and when he showed up, we started the process of looking. Well, I’m certain now that when Dan saw the blood, he knew we wouldn’t find the deer. But, he didn’t say it and instead started asking a series of questions about the deer’s behavior after the shot, what I’d heard, where I thought the deer had traveled and so on. We found a few spots of blood here and there, but when we got to the woods (I was hunting in a blind on the edge of a field), the trail stopped. I don’t recall the exact questions Dan asked at that point, but I do recall a light bulb going off in my head and I explained that perhaps I had hit it in the shoulder and not in the vital area with the hearts and lungs. Dan immediately shook his head yes and then seeing my devastated face, proceeded to explain that the blood indicated that the deer would likely survive. It didn’t make it easier to take. But, allowing me to come to my own conclusion rather than telling me made me really think about what I could do better with my shot as well as observing behavior the next time I went out.

Again, open-ended questions are a must. Instead of asking if they saw any big deer, ask, “What did you see?” Instead of “Did you shoot?” ask, “How did it go?” Start questions with who, what, where or why? Tone why questions down, however, as they are the most aggressive form of questioning. “Why did you shoot that?” could be changed to; “I’m curious about your shot description, why did you think you did that?” Then, listen carefully and intently to answers rather than thinking about what you’re going to tell them next. You learn more by listening than speaking.

To avoid the appearance of focus on you, rather than your student, be prepared. Preparedness is a staple of hunting, so demonstrate it from the start. If you say we are heading out to the stand at 5 am, don’t be making room for me in the truck at 5 am. Be ready for me to hop in the truck. Have everything you need for yourself and any extras that the student may have forgotten. Have extra flashlights, knives, batteries available. Maybe keep some extra jackets, dry socks, and other clothing items ready in a few sizes, especially if there is a specific demographic that is your most common student. If you know how to do some minor equipment repairs, have a small repair kit ready.

Have a timeline well thought out with a few “plan Bs” in place to be flexible for change. Hunting rarely goes as planned so think about as many possible scenarios and be ready to respond.

Have a hunting checklist and run through it each time you go out. Make a habit to check it. It only takes a few seconds and assures you’ve got everything in place. Make adjustments to the list as new issues arise. Share any helpful lists with your student so they can be better prepared as well. I’ve created my own, but Sportsman’s Guide provides a great checklist here.

A few more mentions from “Dan the man”:

Finally, remember that hunting is about the emotions and senses conjured up in the activity. It’s about the sights, smells, and sounds (usually those darn squirrels). Even better, it’s about the tastes of well- prepared game. Focus on these aspects of the experience over the killing of an animal. You’ll notice there wasn’t a single mention of the death of an animal here (although some harm). The single picture of a dead animal at the end of a great hunting trip says little to a non-hunter about the overall experience. They may see it as a final step, but there are even more stories to tell about cleaning, packaging the meat and cooking delicious meals. Tell the entire story and perhaps we’ll make more people passionate about hunting.

To go back to Part 1 of the series, click here.

Note: the image above was taken at Bluff Country Outfitters in Buffalo County, Wisconsin. Check them out here.