The Sounds (and Squirms) of Summer 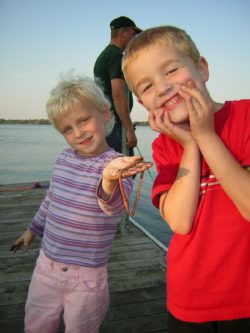 As the long winter finally comes to a close, my mind goes straight to camping season. I have a seasonal campsite at a 1280 acre campground in Richmond, Minnesota. This will be my third full season and every year it seems like it can’t come fast enough.

This year’s winter was especially long with the biggest snowstorm of the year occurring in mid-April. For a while, I didn’t think the campground would even have a chance of opening for Memorial Weekend. Perhaps the Vitamin D levels were especially low this year and may have resulted in extra pessimism.

When I was finally able to open the camper up last weekend, I was met with the greatest of sounds. I arrived at about 10 pm on Friday evening to open my car door to calling loons. Ahhh, I was “home”. Nothing says peace like a loon call on a moonlit night.

I had barely turned the lights on when one of the neighbors came knocking. Besides just stopping to say hello, he proceeded to tell me the first never-going-to-live-down story of summer 2018. He’d came the week before for Minnesota’s fishing opener and left the extra worms in the refrigerator. He neglected to fully close the container and the worms proceeded to escape. That wouldn’t have been a huge deal except during the week, the electricity had gone out at the campground and the camper’s battery wasn’t yet hooked up. In true Minnesota fashion, we went from blizzard to heat wave with nearly 90-degree temps that week. So, imagine the look and smell of a hundred worms crawling around your refrigerator in 80 plus weather for several days. I could almost smell it as he was describing it. Some worms had managed to squeeze their way to the outer seals of the refrigerator and more escaped and fell to the floor. Many had perished and their decaying bodies oozed throughout the inside and out of their broken storage vessel. Somehow, a few managed to survive.

I offered my Dawn dish soap to help out because no way am I offering to help clean that up. Plus, he said instead of cleaning up the mess when he arrived earlier, decided that fishing was more important and headed out to the lake for a few hours before scrubbing commenced. I was invited to go fishing in the morning with him and two other neighbors. I was ready to hit summer hard.

I woke up at about 5:30 am; not on purpose. Perhaps I was just excited. In any case, I ended up checking Facebook and was promptly notified of the Royal Wedding which was about to start (it’s not wilderness so I had no problem using cell service). It was drizzling and chilly (about 50 degrees – which southerners might call cold) that morning, so when I got the text to come to the lake I politely declined in favor of the wedding bells and music. I’m glad I did. I thought the wedding was lovely, nicely mixed to serve both families, wonderful music and very much a modern fairytale. I learned later that the group caught a six fish and were pretty cold and damp in the process. They said they joked that maybe I’d have some extra room so they could all watch the wedding instead. We all have limits. I’m either not as “tough” as I once was, or maybe just wiser.

When I finally got out of bed in the morning, I was greeted with a few other familiar summer sounds; that of the local Sandhill cranes followed by “Donkey”. The campground keeps a favored donkey and his bray can be heard most days throughout the entire acreage. Those sounds just make me feel so grateful and blessed. The call of nature is invigorating – and the brays cause a little chuckle.

I went for my first walk through the woods in the afternoon and was met by a small group of four-wheelers and several groups of horseback riders. I waved and offered big smiles every time. You could sense the bliss in everyone as we enjoyed the woodland beauty together. I was offered a ride back to the campground as I was returning but I declined. I was walking for my health in both movements and soaking in all that nature had to offer.

As I came out of the woods, I saw the corral full of horses ready for trails. They were probably not looking forward to summer as much as I was. Their work is just about to begin, being ridden by all levels of riders, but mostly unskilled beginners constantly yanking at the reins. I couldn’t help but head toward them to see who would greet me and receive a good scratch in return. I believe I made a new friend, Mischief. Perhaps the name will become more meaningful this summer. Who knows?

By 5 pm, the neighborhood was brimming with laughter. We got together for our first fish fry of the season. Neighbors brought out any fish they hadn’t eaten over winter to make room for this year’s catch. The rest of us brought a dish to share. In glorious tradition, everything was fabulous and no one walked away hungry. These gatherings are great for fellowship as well as great food. It was wonderful to hear the humming of stories being told of the long winter season. We keep in touch via social media over winter, but it’s much better to hear stories face to face and around the campfire.

I was happy to see a couple of people who’d been diagnosed with various cancers recovering well. Learning of some accidents and other tragedies made me a little sad. Someone reminded me of my never-gonna-live-it-down moment two years ago when I borrowed the same neighbor’s paddle boat and left it better than I found it (which is my family’s motto) by washing it spotless only to find out I had borrowed the wrong boat. The stories are priceless. Even though the sun had gone under the clouds and the chill came back, the warmth of the fire and friendship kept us lingering. A few extra insulated flannel shirts didn’t hurt either.

The way doesn’t matter – just do it!

I don’t pretend to believe I’m a “real” camper. My RV contains many comforts and am not ashamed to say it I love it. I shamelessly turn the air conditioner on when I’m too hot and the heater on when it’s too cold. There is access to a nice shower and lots of places to sleep. I have refrigeration for food and beverages (of all kinds, of course). What’s most important is that participating in the outdoors of any kind brings out goodwill in all that enjoy it. We are bonded by those special things in nature that each group enjoys. For our neighborhood, it is sunshine, the lake, the neighborhood lawn and yummy fish (caught with a few extra special worms).

“The message is not so much that the worms will inherit the Earth, but that all things play a role in nature, even the lowly worm.” – Gary Larson, cartoonist, and creator of The Far Side.