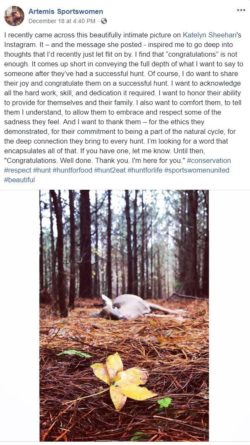 I’ve been searching for a way to challenge the hunting community to rethink how the activity is portrayed. There are random thoughts on notes posted in various places in Evernote, Trello, an outdoor notebook and on the notepad on my phone, but they never really came together until I saw a recent post on the Facebook page for Artemis Sportswomen. The post holds what I claim is now my favorite hunting photo to date along with a little challenge; “for a word that encapsulates”. This is the nudge I needed to connect my previously fragmented thoughts on hunting’s imagery.

Hunting embeds people in nature. While reading the post, I felt challenged to come up with a single word. For the moment, it is embeddedness. I feel the most alive when I am “in” or “among”, a part of nature, participating in its movement. Like the ladies at Artemis Sportswomen, I didn’t want this moment to flit by. So, here are some thoughts on depicting hunting as an embedded “with” nature activity.

The image tells a more compelling story than the ritual pose where the animal’s head is propped up or held by the hunter. Rather than focus on the trophy and self, this image demonstrates reverence. Life, death, and rebirth are all exhibited. I love how it presents an equal split between the ground and above ground; honoring the entire system. We see trees and sky, the surroundings where movement takes place as well as a bed, of sorts, on which the deer gently rests. Encapsulated in a brief moment is the bigger story of the circle of life. Whether the image was set up or not is of no concern to me. It reflects a more authentic view of what hunting really feels like.

The fact that the hunter is not in the image means she has decided her presence isn’t necessary to capture the experience. Her intent seems to honor and appreciate both the grief and praise involved in the killing of an animal. I am hopeful that as more gentle images appear, the “wack-em and stack-em” will fade and hunting can once again become more about being with nature than conquering it.

What new “ritual” image or images can we imagine to better portray all that hunting is? Next time you post an image or your hunt, think about your intent. Does the photo depict superiority or respect? Think about what you felt during the entire process.  Challenge yourself to be creative in representing your full experience.

The post’s text includes words and phrases such as honor, skill, dedication, embrace and respect sadness, commitment to natural cycle and deep connection. One can sense an appreciation of the hunter’s experience as well as the thoughts and feelings that arise from the image. Other words I think of are growth, awe, dignity, land, homage, and veneration. I sensed nothing negative in my reaction to the photo. I’m certain some non-hunters might still find the photo offensive. It shows death – but death is a part of our life cycle. Perhaps if more people understood this, they would live life more fully.

Authentic is another word that strikes me. Even if the image was arranged, it is feasible that it was not. That isn’t true of the “ritual” hunting pose. Thankfully, what the hunting industry calls “lifestyle marketing” seems to be heading in this direction. In fact, last year I learned that one of the state wildlife agencies started granting several average hunting and fishing license holders permission to share their authentic experiences on the agency’s Facebook page. Post engagement was incredibly high compared to other marketing efforts; demonstrating that people prefer real stories of mistakes, mishaps, and harvest.

For me, hunting puts me on a vertical plane with the rest of the planet. I feel a part of nature, not some alien or machine trying to control. What words come to mind for you when you hunt or when you tell hunting stories? Spend some time making your own list. Brainstorm how those words are better utilized as you record your hunt. How can you be more authentic?

The only word with which I struggle is the word success. For me, every hunting endeavor is a success. I have more stories to tell of the times I didn’t bring home food. Two hunts come to mind as I think about hunting success because my memories of them are so vivid. The first was when I watched a fawn and pheasant interact as if they were playing tag in the slew near my stand. I imagined a little story about what they were saying to each other as I watched the chase.

The second is an evening in Wisconsin where five yearling bucks gathered on the edge of the field and took turns sparring with each other. They were so oblivious to my presence that I started quietly chanting “fight, fight, fight, fight” to see if I could induce a reaction. I didn’t, so I reached for my phone to record a few minutes to enjoy again later. I could have watched those bucks for hours, contemplating their battles for supremacy.

Of course, I have fond memories of times where my efforts resulted in meat. I also realize that for many hunters, the antlers or other “trophies” are more meaningful than just the kill. They often represent a chance to recall and relive their entire hunt – not just the moment of the kill. A friend recently explained that the one “trophy” on his wall is a daily reminder of how blessed he is to have had such deeply embedded experiences. And, when people ask about them, he gets to tell his story all over again. For the non-hunter, I imagine it difficult to comprehend animal parts hanging on a wall in any other way but to represent domination. And, that makes sense if you’ve never experienced hunting.

What does hunting success mean to you? Are there other images you can post showing others that hunting is not just about killing? What hunting misses and mishaps might also capture the exhilaration of hunting?

Did that one really get away?

One of my favorite pictures is of the “one that got away”. On my last staff bowhunt working for the archery industry, I decided to pursue a buck that had antler damage on one side.  I had recently begun thinking differently about hunting and starting to claim my own way of appreciating it. This deer represented uniqueness to me. I spent five days in the tree stand where he’d been spotted almost every evening for a week on a trail camera. A few does and two young bucks came through about the same time every evening. Never this special buck – that is, until the last evening.

The two young bucks had stopped right in my shooting lane about 12 yards out and 20 minutes before the end of shooting time. I figured the hunt was over.  So, I proceeded to practice pulling my bow back and aiming at the bucks as if I could have taken a shot (to shoot bucks here they had to be 8 points or more). As I pulled back a third time. While the sun slowly disappeared, a shadow walked into view. Sure enough, the buck I was waiting for finally appeared. He did exist. I was beginning to wonder if I was just being fed a story.

With 5 minutes of shooting time remaining, I could have let my arrow fly. He did come in straight broadside, presenting an ideal shot. I simply didn’t feel comfortable with the light level. Instead, I drew back one more time for practice, then hung up my bow and got out my phone camera. He “got away”, as in, I didn’t kill him.

I have those dark and grainy photos. When I look at them I still imagine exactly where I was sitting, the tree stand, the surrounding woods, and field, how he came into view from the left and then ambled away to the right. He will never really “get away” – he’s embedded in my memory.

What’s your one word?

If you had to encapsulate hunting into one word, what would it be? Brainstorm a list of words recalling your hunting stories and/or pictures. What seems to be the “one word” that best connects them? Share your thoughts in the comments below. I hope you’ll look at this exercise as a positive challenge to think about why you hunt, how it affects you and how you can better reflect that in the images you post and share.

I hope anyone in the hunting industry who sees this blog finds it useful to reexamine the words and images used to represent the activity. Ideally, I also hope my “one word” and my stories will inspire others to consider embedding themselves in nature through hunting.

Note: The original image above is from Katelyn Sheehan.

Thanks to Tom Indrebo at Bluff Country Outfitters for rounding up an image of “the one that got away”. 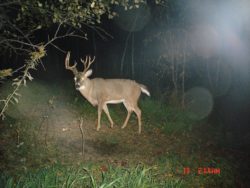 The One That Got Away. Bluff Country Outfitters 2015

Hunting for a New Perspective

What It Takes to be a Great Mentor: Part 1.

What it Takes to be a Great Mentor: Part 2.